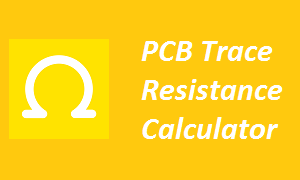 Enter the values in empty cells and press CALCULATE button to calculate the value of PCB trace Resistance.

PCB Trace Resistance Calculator presented here will help you to find the correct thickness of the PCB trace which will support correct flow of current in PCB.

What is PCB trace?

In PCB’s (printed circuit boards), the trace is mostly referred as the connecting links of copper that is made or placed or printed on the board. The PCB trace resistance means the parts of a PCB that resist the flow of a current.

What is PCB trace resistance?

To calculate PCB resistance, we have to first focus on PCB trace width, as it is an important design parameter in PCB design because a suitable trace width makes sure that it can transfer the preferred amount of current without overheating and damaging the PCB.


PCB trace resistance calculator will help to calculate an approximation of the minimum trace width for a given supply current and for copper weight.