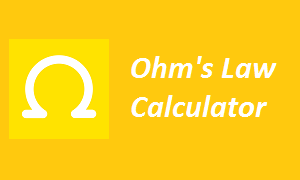 Enter any two known values and press "Calculate" to get answer and "Reset" to clear.


Many times many of us heard about Ohm’s law. All electrical and electronics engineer, technicians, hobbyist, etc. normally or frequently deals with ohm’s law, that’s why it’s very important to understand ohm’s law.

Here in this article Ohm’s law definition, Ohm’s law calculator and calculations are presented and discussed in detail.

An excel sheet for Ohm's law calculation is provided which you can get by clicking on below button. This excel sheet you can use in your laptop, computer, tablet or mobile. Please click below button to download it.

What is Ohm’s law

We can define or we can say the definition of Ohm’s law is, “the current across a conductor between two points is directly proportional to the voltage across the two points”.

Resistance is introduced as constant of proportionality. Resistance in given equation is constant and not dependent of the current.

In other words, or simple words, we can also say that; the relationship between Voltage, Current and Resistance is called as Ohm’s law.

Ohm's law is an empirical relation i.e. experimental relation which exactly defines the conductivity of the several or many of electrically conductive materials over different level or stages of the current.

Non-ohmic material or conductors do not follow Ohm's law.

The equation in terms of math for the Ohm’s law can be given as; Resistance = Voltage / Current.

Ohm’s law triangle helps us to remember the ohm’s law formula's by the help of picture.

In this triangle the voltage, current and resistance conquers or occupies different spaces (places) and all are fixed in these spaces i.e. no variation or deviation of spaces is allowed.

In this ohm’s law triangle initial position starts with Voltage which is at top. Below position is occupied by Current and Resistance.

Below triangles explains the Ohm’s law in easy way;

The rate per unit time, an electric circuit transfers electrical energy can be defined as Electric Power. The International System of Units i.e. SI unit of the power is Watt one joule per second.

Letter “P” is used to represent it.

The Power can be given as; “P = V x I” in terms of voltage and current.

Electric power formula, we can write as per ohm’s law;

Below picture will help us to remember the formula for power, this picture is called as power triangle.

In this triangle the power, current and voltage conquers or occupies different spaces (places) and all are fixed in these spaces i.e. no variation or deviation of spaces is allowed.

In this power triangle initial position starts with Power, which is at top. Below position is occupied by Current and Voltage.

Below triangles explains the electrical power formula's in easy way;

By these formulas, we can create ohms’ law wheel. Twelve different formulas are mentioned in ohms’ law wheel according to Voltage, Current, Power, and Resistance.


Also, Ohm's law Table of Formulas we can create on the basis of the same;

Ohm's law is a significant rule to answer or explain the current, voltage, resistance and power issues.