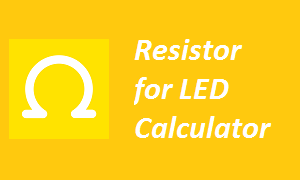 Resistor for LED calculator and calculations for the same is presented here in detail. Nearly in all applications in which LED’s are used a resistor is connected. This resistor is in series with the LED.
Selection of resistor for LED is not a very difficult job, only we have to follow the step wise process which is mentioned in this article.
For calculations of Parallel Resistor please use, Parallel Resistor Calculator.
For calculations of values of Voltage, Resistance and Current as per Ohm's law please use, Ohm's law Calculator.

“Resistor for LED calculator” will help or guide you to calculate the LED resistor in simple and fast way. You can cross-check your manually calculated LED resistor value with this calculator value, to check, is results are matching.

An excel sheet containing, Resistor for LED Calculator or LED Resistor Calculator is also provided. This excel sheet you can download and keep in your mobile or computer and can access anytime.

Steps to calculate Resistor for LED let discuss in detail;

Use of Resistor for LED’s

Because of good power efficiency LEDs are more common for nearly most of applications as an indicator or light.

Also, as compare to incandescent or fluorescent lamps, it has very good life span.

Light Emitting Diode is the full form of LED. It’s a diode and like diode it also has anode and cathode polarity. When we apply suitable power across LED i.e. power matching to LED specifications, LED starts to work and produce light.

Same like diode for LED also we have to follow the polarity requirement, else it will fail. Since LED permits low value of reverse polarity voltage, which is approximately 5 volts.

As LED is a diode so, the current across the LED should not cross the maximum limit else it will cause LED failure.

This is the purpose or reason for the use of resistor in series with the LED. In simple words we can say that the LED resistor controls the current through the LED.

Let see the necessities or requirements for the current control resistor which we have to use with a LED;

The voltage which makes LED to work is called as, “Forward Voltage (Vf).

Forward voltage requirements of some common type of LED’s are mentioned below;

That’s why resistor in series with LED is used, where the resistor controls or limits the current according to forward voltage.

If we apply direct DC voltage to a LED without connecting a resistor in series, the LED will work.

But if the voltage and current which we apply to the LED is not matching to the requirement or specification of LED, the LED will glow dim or may be bright or may be it get highly heated and get fails.

If current crosses the electrical requirement of LED (as mentioned in LED specification), the LED will fail.

That’s why, a resistor we have to connect in series with the LED, whose current we want to control.

Calculation for the selection of LED resistor

Please check the Ohm's law calculator to get more about it.

Below figure gives more detail;
Where; V is the applied DC voltage.

This voltage can be calculated as; V = (applied Vdc) – Vf.

I is the amount of current which should flow across or passes through the LED to make it work i.e. to make it ON.

Now let see with an example;

Many LED’s connected in a circuit

Consider a situation, in an application there’s a requirement of many LED’s.

In parallel connection we can use multiple LED’s of same colour or different colour.

In this situation, similar voltage from voltage source will be available at each LED string, but according to number of LED’s the current requirement will increase.

The wattage requirement of each resistor will also increase as current increases.

Let understand this by below example;

For different types of colour LED, we have to calculate current requirement of each string and have to add all the currents.

In this situation also voltage will be same and we have to subtract the forward voltage from the applied supply voltage.

Like previous performed calculations, the calculation of power rating of resistor value will stay same. As stated before you have to choose high wattage resistor as compare to the calculated one.

We have seen that by using the Ohm’s law we can do selection of resistor for LED in simple way. But we have to consider the LED’s specification sheet before performing any of calculations. By which the voltage, current and wattage should be in the control and will not damage the connected resistor.